TOPNews – JAKARTA. After the success of the Realme 7 Series, now Realme is confidently presenting the Realme 8 Series. The Realme 8 line is now available and can be ordered in Indonesia. Interestingly, the price of the HP Realme 8 is only Rp. 3 million.

Realme officially launched the latest generation of HP mid-range them through the Realme 8 Series. As the successor of Realme 7, of course, Realme 8 is expected to achieve the same success. Especially if you look at the relatively cheap price of the HP Realme 8.

The Realme 8 specifications themselves are arguably not that much different when compared to its predecessor. Even Realme 8 still uses the same chipset series, namely the Helio G95 gaming chipset. This gaming chipset will receive performance support from 8GB RAM and 128GB of internal memory which is clearly very large.

A significant difference in the Realme 8 specifications is in the camera section, where this series uses a 64 MP (wide) sensor, while the Realme 7 is only 48 MP. Other sensors that are present include 8 MP (ultrawide), 2 MP (macro), and 2 MP (depth). While on the front there is a 16 MP selfie camera.

Refer to the official website Realme Indonesia, The price of the HP Realme 8 is currently priced at only Rp. 3,399,000. You can get this cheap HP Realme 8 through the system pre order which has started from April 7-14. Orders can be made via Realme.com or JD.id.

After time pre order finished, Realme Indonesia is still presenting sales through flash sale on April 8th. Next, normal sales will begin and the price of the HP Realme 8 will be IDR 3,599,000, still very affordable.

Also Read: It can be ordered, the price of the HP Realme 8 Pro is only IDR 4 million 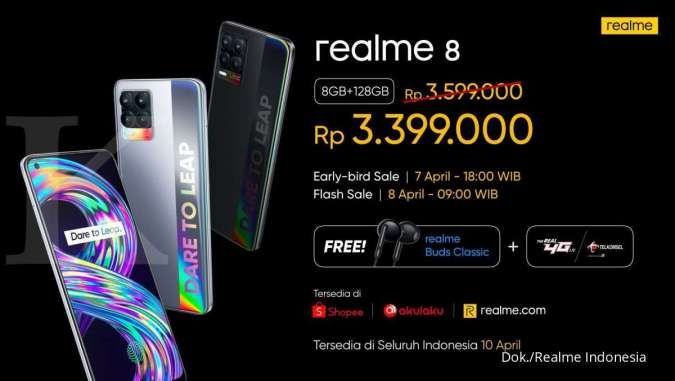